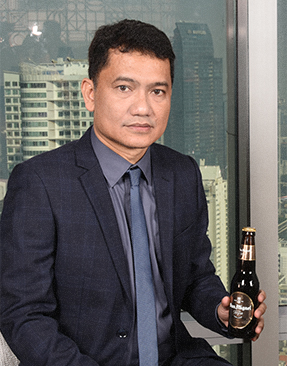 A Filipino citizen, age 54, Allan I. Abrea is a chemical engineer by profession. He obtained his Bachelor of Science degree in Chemical Engineering from the University of the San Carlos, Cebu, the Philippines in 1986. Mr. Abrea acquired his expertise in brewing science dan technology from the San Miguel School of Brewing where he finished his Brewing Technology course in 1992. He built his entire 30-year career with San Miguel Brewery Inc. (SMBI), holding positions both in the Brewing Technical Group and Manufacturing Group. He has been assigned to various international brewery installations such as Brewmaster/Brewing Consultant of San Miguel Brewery Hong Kong Ltd. and as an Assistant Brewmaster of San Miguel Boading Brewery, Hebei, China. He was the Operations Technology Brewmaster of SMBI's Brewing Technology Group prior to his appointment as Director of the Company in June 2019.